It’s no secret that the Miami Heat are in a transitional year. Internal growth from the young core is and should be prioritized over win/loss totals this year.

If you think otherwise, you’re probably not going to enjoy this season.

With that said, I’ll be kicking off a series of posts, grading each rotation player in five-game increments just to get an idea of how everyone is progressing as the season goes on.

It should be noted these grades are based on each player’s production in their specific role. For example, Luke Babbitt will have a higher grade than Dion Waiters, but Waiters obviously has more on his plate, so his grade still holds more Wait.

The Heat are playing faster this season, and Dragic has benefited — because, duh. Dragic currently ranks in the 73rd percentile in total offense via Synergy after finishing in the 39th percentile last season.

Dragic has been flames from the perimeter (95th percentile on spot-ups), and has had success finding guys when turning the corner in pick-and-roll; spot-up shooters are shooting 37.5% from deep off Dragic passes coming in PnR situations.

Defensively, Dragic has once again held his own. He fights hard through screens and stays connected to his man on drives, funneling his guy to help if he needs it:

There isn’t much to complain about from Dragic outside of his mid-range jumper not falling so far.

Beyond the numbers, Johnson’s energy on both ends has been a breath of fresh air this year. He’s been more patient in pick-and-roll, though I’d love for him to keep his dribble alive more than he does. His on-off numbers don’t reflect how good he’s been.

On one hand, Waiters has given great effort, has shown flashes of good on-ball defense, can get into the lane almost any time he wants, and he was en fuego against the #Kangz:

But then….there’s this (which is also the greatest video ever):

The Waiters experience has been a roller-coaster of epic proportions. He’s been better from 3 than he has been inside of five feet.

For this team, he’s a guy you have to rely on while hating every fiber of your being in the meantime.

It’s a little surprising that McGruder has been a consistent part of the nine-man rotation: not because he shouldn’t be, but because I figured James Johnson/Derrick Williams/Willie Reed would be the back-up frontcourt.

Despite being in the guard section, McGruder has been used as the backup three with some mixed results.

He’s had a couple of nice cuts, has hit some threes and has had some solid defensive possessions. He’s also picked up some bad fouls, been caught out of position with over-activity, and hasn’t hit a three since the first half of the Hornets game… which was three games ago.

Note: Josh Richardson made his debut against the Raptors on Friday, logging 11 minutes without scoring a single point (0-4 FG). It’s obviously too early to judge him on a serious level; him getting out there without feeling discomfort afterward was a win in and of itself

Let’s get the context out of the way first He’s 20. This is probably his first high-usage season ever where the competition is as good or better than he is. He’s averaging over eight more minutes than he did last year, with more offensive responsibility, while also doubling as the guy who guards elite wings. We’re five games into an 82-game season

In the words of our Lord and Savior Pat Riley, “this stuff is hard.”

Context notwithstanding, this hasn’t been a pretty year for Justise.

His offensive production has improved, and he’s legitimately shown (more) flashes of being a reliable secondary creator; via Synergy, he’s generating 1.231 PPP off his passes in pick-and-roll, good enough to rank in the 91st percentile.

But man, his shot has been predictably awful. He’s been hit-or-miss as a finisher. Worst of all, his defense has fallen off a cliff this year.

That last one would be more defensible if that was just a product of getting caught in a switch against a big man, but Kawhi Leonard (understandable) and Johnathon Simmons (c’mon, man) both had their way with him in the Spurs game.

I have no doubt in my mind that Justise will be fine this year, and moving forward. It’s also fair to point out that he hasn’t been very good to start the year.

Babbitt has two jobs: knock down perimeter shots at a high level, and don’t get killed on defense.

In typical #OfCourse fashion, Babbitt has done a better job at the latter than the former. He ranks in the 93rd percentile in overall defense, but only ranks in the 32nd percentile on spot-ups.

One of those things will change.

His defensive versatility has been on display, and he’s thrown some how-the-heck-did-he-fit-it-there (#TWSS) passes.

He’s been a trainwreck otherwise.

He can’t shoot and has forced up too many shots in traffic for my liking. Derrick Williams not logging a single minute thus far also adds to the frustration of watching Johnson when he goes all willy-nilly. It’s just…ugh. 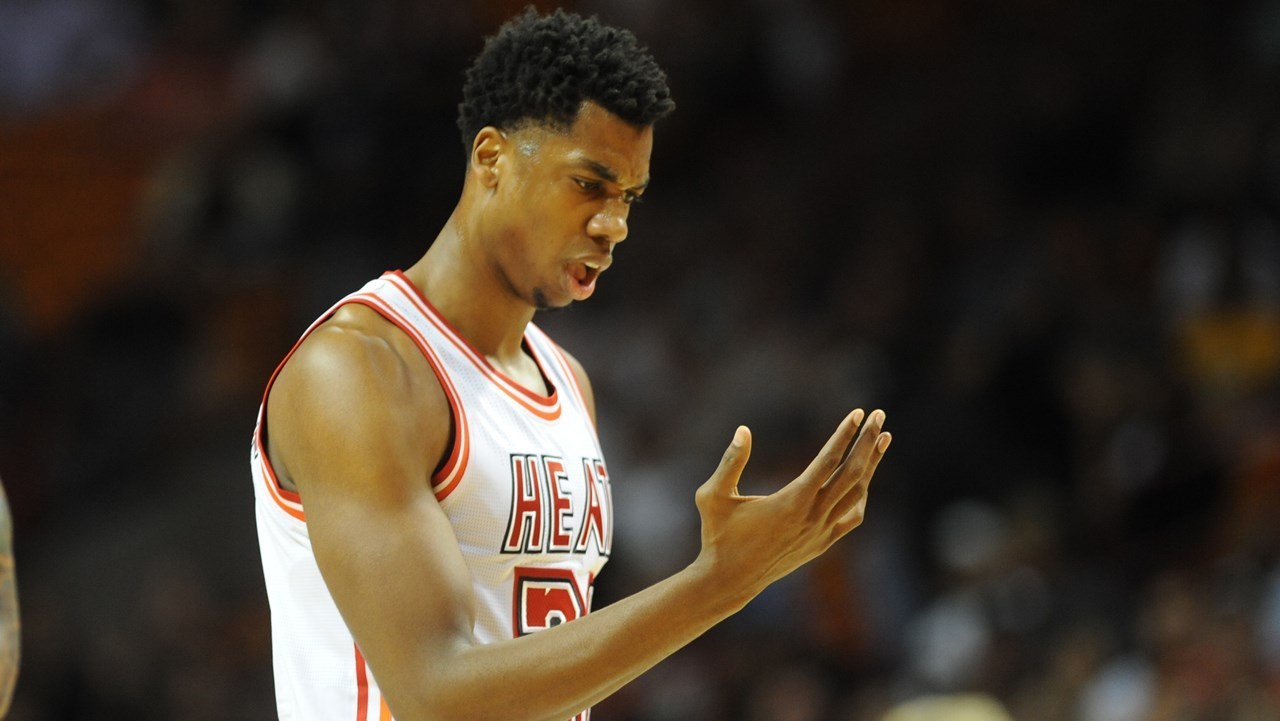 I’ve had my gripes with Whiteside this year. The screening is back to 2015 pre-ASB levels, his body language has been off, and I’m not sure anything will grind my gears quite like this dunk…on the road…while down 11:

Nitpicking aside, Whiteside has been an absolute force.

The post game still needs some work (30th percentile), but he’s been a monster on the left block (82nd percentile. He loves getting to that righty hook, as he showed us in the Spurs game:

Teams have been crowding the paint to take away Whiteside as a roller (53rd percentile as the roll-man this year), but I expect that to improve when Richardson takes over the starting spot in favor of Waiters.

Teams are shooting 32.6 percent at the rim against Whiteside this year, the 4th best mark in the NBA among 60 players defending at least five shots at the rim per game.

Reed has shown flashes, and he’s probably Miami’s best non-UD screener already. He hasn’t missed a shot as the roll-man in pick-and-roll, and he’s been active on the glass.

Defensively, he’s still trying to find his way in terms of positioning. Teams are shooting 61.1% at the rim against Reed, and that’s mostly because he isn’t in position to affect the shot. I love the guy, but he has to be better.

Note: As expected, Udonis Haslem has been used in spot duty, specifically during the Kings game last Tuesday. That’s his only appearance of the season so far. He posted a negative net (-21.2) but had a DRTG of 83.3. He held down the fort long enough for Whiteside to reenter late in the 4th, and that’s all you could really ask for in that spot.